“Soooooooo, I came up with a reeeeeeeally crazy idea for my birthday.” Steve looked at me with a pensive glance, trying to imagine what in the world would come out of my mouth knowing full-well it would probably far surpass whatever he could conjure. “I thought of something that represents so much of who I am and what I enjoy. I looooooove road trips. I think it’s really important to keep alive the ‘do something spontaneous’ part  of me. I looooooove going all-out on whatever subject the kids and I are studying for homeschool.” A smile started to curl on Steve’s face. Oh boy, what crazy idea was Marina about to present?

Just the night before while the house was still, everyone fast asleep, I had been up late planning homeschool lessons. With our current unit of study on amphibians, I was searching that topic on the BrainPop website (one of our all-time favorite educational websites, with Tim, a boy and his robot Moby). I searched for ‘amphibians’, watched the accompanying video, clicked on the FYI section…..and then ‘lo and behold came across this very interesting piece of information: 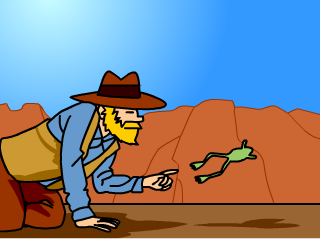 “Calaveras County is a rural area in central California, in the foothills of the Sierra Nevada Mountains. More than 150 years ago, it boomed during the California Gold Rush, but since then, things have become fairly quiet- except for one week each May, when the area hosts its annual County Fair and Jumping Frog Jubilee.

The Jubilee takes its name from a short story written by Mark Twain in the 1860s, called “The Celebrated Jumping Frog of Calaveras County.” In the story, a compulsive gambler bets $40 that his frog can jump farther than any other frog in the area- and loses when a rival takes the bet and shots the frog before it can jump.

The contest held at the Jubilee is a lot less violent, but incredibly popular. Some 35,000 people attend each year, and more than 2,000 frogs participate in the initial rounds of the jumping contest, with the top 50 frogs qualifying for the final round, known as the International Frog Jump Grand Finals.

Currently, the frog-jumping record is 21 feet, 5 3/4 inches, set in 1986 by a frog named Rosie the Ribbeter. If your frog breaks the record, you win a cash prize of $5,000. So start looking for a frog with powerful legs- it just might win you some money!”

And that led me on a rabbit trail of Mapquesting “Calaveras County”, looking up primary documents of Mark Twain’s famous short story, looking up the website for the Fair and reading the weekend’s schedule of events, watching YouTube videos about the Kitchell family members that have won the frog jumping contest for the past 3 years…….and that’s when the crazy idea was born. Would we? Could we? Oh my word….driving 407 miles north to go see a frog jumping contest?! But man what are the chances?!?! It’s my birthday weekend…..the Grand Finals are at 3pm on Sunday, May 18th, my actual birthday……and we are in the middle of an amphibian unit as part of homeschool!!!! Oh this seemed just right. Perfectly crazy and absolutely zany idea of fun.

And, yet, I went to bed that Thursday night thinking it was perhaps a tad bit too crazy. It wasn’t even a long weekend. Driving 407 miles up north and then 407 miles back, all in one weekend? Not to mention that Jacob had his all-important, potentially last baseball game of his first AAA season that would determine if his team won 1st place in the second half of the season. That game was from 11:15-1:15pm. We couldn’t leave before then. Natalie had her piano class from 1:30-2:00pm. We wouldn’t be able to hit the road until after all of that. So I didn’t even mention the idea to Steve when he woke up early to go to work on Friday morning. Mid-Friday Steve texted me saying that the Seniors from his high school were leaving for Grad Night on Saturday at 4pm. He was letting me know he would have to be at the bus, checking kids for departure. Oh okay. Well that put the nail in the coffin of this crazy Calaveras County road trip idea. There was no way we were going to begin a nearly thousand mile journey, starting after 4pm on Saturday. So there we were Friday night, Steve and I enjoying each other’s company on a spontaneous date night at a local restaurant, sipping our margaritas, when I shared all the crazy thoughts I had conjured up for a birthday road trip. I shared with him my whole thought process…..where the idea had been born, the rabbit trails I had pursued in research, the flurry of excitement I had felt in the imagining of it and the realization that hit me of how it was something I needed to let go of when he texted he’d have to be at school at 4pm for the bus send off. But do you know what happened next??????? That’s when he looked at me and said “but that doesn’t mean we still couldn’t do it. If that’s how you would like to celebrate your birthday, let’s do it.”

What?!!??!!?!?!?!? Was I hearing right? Did Steve just say we could begin a thousand mile road trip after 4pm on Saturday?!?!?!? WHAAAAAAAAAAT?!?!??!?? I stared into his eyes and read complete, genuine interest in the entertainment of this crazy road trip idea. Oh.my.word. He was serious! I could feel my excitement growing in anticipation that this idea might still materialize. I explained to him that I have a desire to keep alive the part of us that is willing to live with spontaneity, to make some decisions that just don’t make sense. And my husband was willing to make it happen! Oh my word I was loving him sooooooo much in that moment. This type of road trip goes against all common sense. It’s not practical. It’s extravagant. Who in the world drives nearly 1,000 miles and enjoys a fair all within 30 hours? The Wallises- that’s who!!!!

And so…….our road trip began. Here is where it got even crazier! By the time we were packed and ready to roll from the day’s activities…..it was 6:30pm. Yup. That’s how the Wallises roll.