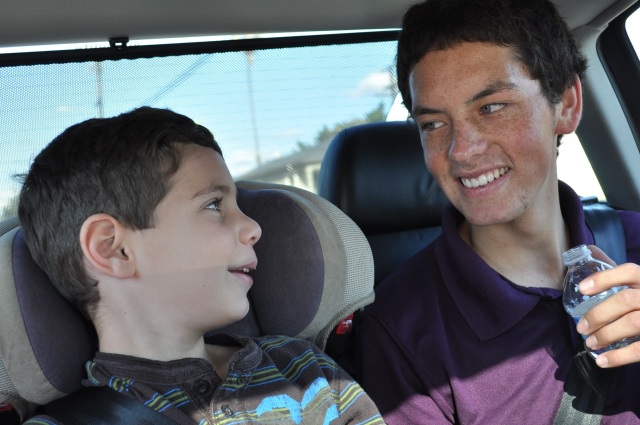 Today was a very big day in Jacob’s life. Just a couple weeks ago for his 6th birthday he got a skateboard. When I took him to the park I surmised very quickly that I was not the one to teach him anything about skateboarding. I didn’t have a clue if a board has a front end, back end, which foot to put on the board, or anything else. It was in that moment I realized I needed to call on the help of someone else. That’s what life is all about, right? Finding the right people and asking for help.

So who did I call? Tony Rosales.

Let me tell you about Tony. He is a young man who is in his Senior year at Hawthorne High School. Steve and I got to know him four years ago when he started attending our Young Life club. He came to us knowing about Young Life- he had been attending the Lennox Middle School YL club. And check out this story! So, so, so cool! When he was 7 or 8 years old, he saw a neighbor kid ollie over a trash can on the sidewalk. Watching that older kid do that trick piqued Tony’s interest in learning how to skateboard. And that’s when he started learning.  Fast forward a few years to when he was in middle school……skating on campus in the evening hours, looking for things to jump, curb….(I don’t know the lingo).

Well now bring into the picture Alma Ventura, a spunky, high-energy Young Life leader of the LMS club. [Alma had attended our high school Young Life club and fell so much in love with God that she decided to become a leader while she was attending LMU. Sooooo cool!!!! And now she’s on paid staff in Northern California following her call to continue the YL ministry for God.] Okay, so here’s Alma……every club night she spotted Tony skating on the LMS campus. She’d shout out a hello to him, invite him to come check out the club. He always declined. This went on week after week. Alma continued to say hi. She continued to invite him to come check it out. He continued to decline. But it was her very persistence in extending a warm, welcoming hello and a genuine invitation for him to join the fun inside the cafeteria with the YL club that one day, weeks weeks weeks weeks weeks later that caused him to stand in the doorway and just check it out. Tony shared with me that it was incredible to him that Alma didn’t just write him off. She could have thought “Well, I already invited him once. He said no, so I’m just going to let him be.” Alma continued to seek after Tony. If that’s not the most beautiful example of exactly what God does with us. He pursues us. He waits for us. He invites us. He greets us. He is just as warm and loving the first time he invites us and calls us, as He is the 39th time. And so on. He is simply ecstatic and excited to bring us into the fold of His loving embrace and all the good that He wants to share with us. And that is what Alma did for Tony.

Now fast forward……Tony is a Senior in high school. He started in Young Life in middle school and now has attended the high school Young Life club for 4 years.  But not only that. He has chosen to be a leader at the very same middle school YL club where it all began for him. Every Thursday night he’s there intentionally waiting out on the pavement inviting skaters and other passersby to come in and hear about God’s glorious good news.  And he’s there welcoming with a huge smile all the kids who’ve decided to check out this place where faith in God is talked about. God is good. Very, very good!!!

And just to think that way back when Tony was 7 or 8, but a mere child…..his interest would be piqued in skateboarding and that very thing would lead him to the place where his faith would grow.  Tony is now a young man submitting his Cal State and UC applications, waiting to see where God leads him into a new chapter of his life as a college student.

And this is the young man who Jacob looked up to today. I have never seen the look on Jacob’s face as I did today. It’s hard to even put words to…..it’s such a new look. It was a look of awe, admiration, respect and complete marvel. Jacob has hung out with Tony before- he already thought so highly of him and his skateboarding skills. But today Tony spoke significance into Jacob’s life. The look began on Jacob’s face when we picked up Tony at his house. And then it continued at the park when we all got out of the car, the guys got their boards, and Tony started to break it all down into basics for him. Two hours. Two full hours of time dedicated solely to Jacob. The worth that Tony spoke into Jacob’s life today is actually bringing tears to my eyes as I type this. It’s actually reminding me of a quote I once read in the biography of Mother Teresa. Someone once asked her how in the world she took care of all the people that she did, without getting overwhelmed by how many more people there were still waiting to be tended to and loved on. She responded saying that making a difference in the world may seem like an enormous task, but she just focuses on the very person(individual) she is with and one person at a time, loves and cares for people.

And that’s exactly what Tony did today. He focused on Jacob. He gave him his utmost attention. He was fully devoted to him in speech, eye contact, encouragement, teaching. He was fully present for my 6-year old son. I can never say thank you enough to Tony for the gift he gave my son today. He spoke volumes today of Jacob’s worth. Jacob knew he was significant because this senior in high school who could have been doing a million other things today and yet chose to hang out with him, a 6-year old boy, at a park.

And that is exactly a mirrored story of what God tries to tell us every day. We are of extreme value to Him. His son, Jesus, died on the cross for us to tell us of our worth. He yearns to hang out with us. One on one. And, man, when I do hang out with God, I am truly filled with the sense of how lovely and loved I am in God’s eyes.

I thank the God of the universe that today my son could look up into the eyes of a young man who was so loving and so patient and feel that fabulously glorious feeling of knowing he’s walked with someone of great stature and great esteem.

I look forward with great anticipation to see the incredible plans God has for Tony’s life!!! I’ve already witnessed sights of Tony’s passion for the Lord, his perseverance and dedication to excellence in school, his phenomenal personality that draws people to him, his incredibly strong leadership skills, his commitment levels to the discipline of training and running a marathon, his humble hard-working nature that will work, work, work to get necessary stuff done even when people don’t ask it of him. And today I witnessed how gifted he is at teaching young children. This is a young man who steps it up to get work done, all types of work, with diligence and excellence- all while maintaining a very, very humble spirit.

If Jacob wants to be like Tony, I won’t stop him. No way! If Jacob continues to look up to Tony, with his eyes wide in awe, admiration, respect and complete marvel of him, I know he will be watching and learning and emulating and growing into a phenomenal man.

Tony, tonight especially I praise God for you.

Another quote Mother Teresa is famous for having said was: “I am a little pencil in the hand of a writing God, who is sending a love letter to the world.” Today, Tony, you were a little pencil in the hand of our awesome God. You helped God send a love letter to my son today at Del Aire Park. And for that I will be eternally grateful. It makes “sense” to us when our parents or family members hang out with us and give us gifts of time, encouragement, acts of service. But when someone who isn’t even part of your family does any of those things, God uses that in VERY powerful ways to speak into our sense of significance and worth. Because in those cases none of it is expected or deserved or even makes sense to us. Our mind gets filled with the thought “Why would that person hang out with me? Why?” It goes contrary to what we expect. And in those moments, God speaks love to us in volumes that our hearts and minds can simply not ignore. And we are filled.

Thank you Tony. Thank you.