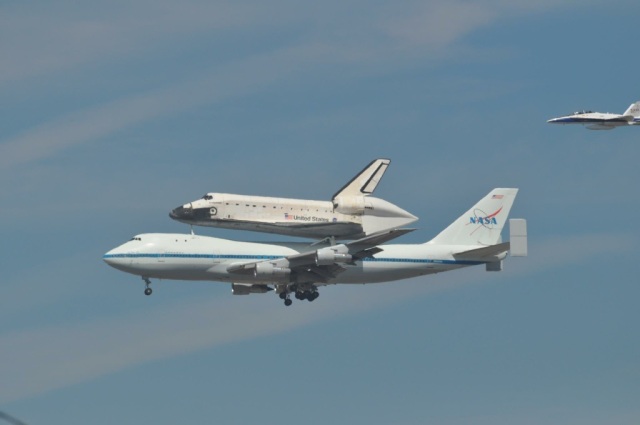 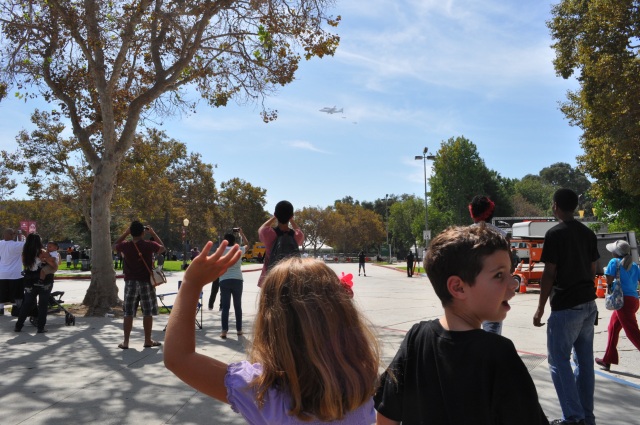 The last of the 4 space shuttles awarded to museums, made its arrival into Los Angeles today. Space Shuttle Endeavor is now the only space shuttle on display west of the Mississippi!!!! Woohoo!!!! And it will be housed at the California Science Center right in our backyard. Today the kids and I participated with thousands of people who clapped and cheered for its arrival. It was awesome!!!!!

We arrived at the California Science Center around 9:30am. We had been faced with so many options of locations for the flyover….the Getty…..Long Beach Queen Mary….Griffith Observatory….Disneyland….Santa Monica Pier….and many more. I love it that they planned an itinerary to make it so visible to the public. I love it that we felt like we were part of the cheers and hoopla of a community excited for its arrival.

The shuttle, aboard a 747, and flanked by two fighter jets was an incredible sight to behold! It flew past the Science Center just past noon. Then after it made its appearance in Hollywood it turned around and made another flyover past us at the Science Center. It was really quite incredible!!!!! Just to think that typical planes fly at 10,000 to 30,000 feet and yet this one was given permission to fly at 1,500 feet to give us all a beautiful view. I love the idea of hundreds of people cheering all across the city at different times as it made its appearance.

Before it had arrived, the kids and I went in the Space Center and I treated the kids to a souvenir. Jacob picked out a really cool glow-in-the-dark shuttle shirt. Natalie picked out an astronaut bear; she sure does love stuffed animals! Then we explored the museum a bit…..learning that Endeavor has had 25 space missions and 4,671 Earth orbits! We checked out the meteorite rocks on display, watched a video about the life of a star…the sun, supernovas, black holes. We listened to “Tess” the 50 foot BodyWorks human replica present on ‘homeostasis’. We smiled at the cute chicks that were in 18% humidity and 90 degrees and then were shocked to read the hygrometer for the unhatched eggs to be at 61% humidity and 97 degrees! Then out the door we went in hopes of catching a spectacular sight of the Endeavor.

We positioned ourselves next to the Eyewitness 7 TV van. Turned out to be great hearing updates from them about where the shuttle was flying over. It’s at Point Mugu…..it’s in Ventura County…..it’s over Malibu…..it’s on its way here……..it’ll be here any minute now…. 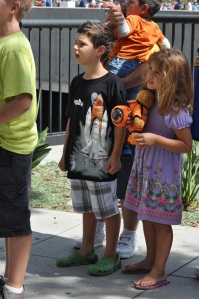 and then the roar of the engines!!!!!

It flew right past us soooooooo fast. After heading to Hollywood it turned back and flew over the Science Center one more time. Awesome!

I celebrated this “once-in-a-lifetime, never-to-happen-again” event by letting the kids get the largest-size of the powdered candy sugar. They couldn’t believe their ears. I assured them this would never ever ever happen again in their life. It was a super special occasion and this would be a fun way to celebrate it. Well, I had this inkling that if we got on the road soon, we might (just might) get lucky enough to see it making its return from Orange County and watch it heading over to LAX. 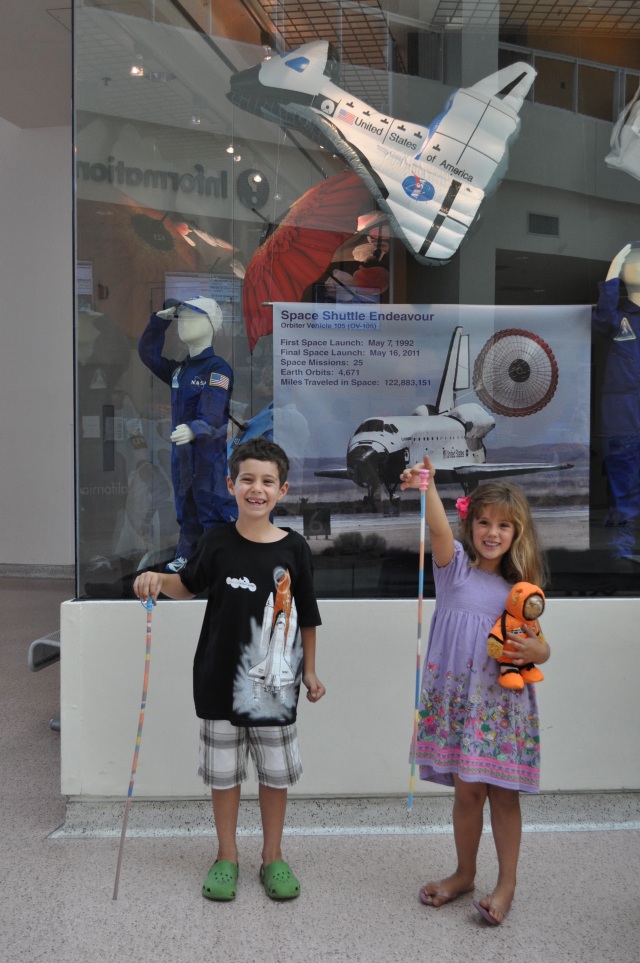 And we did luck out!!!!! I mean MAJORLY luck out!!!!! Just as we were driving up the awesome, elevated, carpool lane interchange from the 110-to-105- we saw it heading straight towards us and then making a large sweeping curve in the sky to head west towards the airport. WOW! Now that was spectacular. We couldn’t have timed that more perfectly. We were screaming and cheering in the car as we watched it while driving on the 105 freeway.

We followed it all the way to LAX. It had veered north a bit and we had lost sight of it. In the meantime I was thrilled to find out that the 105 freeway nearing the LAX exits was all jammed up. Hundreds of people had pulled over and parked in the shoulders of the freeway. We joined those hundreds. From inside our car we had the most spectacular view of the 747/Shuttle making its descent and landing at LAX. It was awesome!

Then we headed down Imperial Hwy in a sea of cars, towards El Segundo. We majorly lucked out, got a parking space and walked to the corner of Main and Imperial- where we could see the 747/Shuttle on the runway, near the cranes that were ready and waiting to hoist it off the top of the 747.

A spectacular, memorable day for sure! We can hardly wait for the Oct. 12-13th parade when it will be brought down the streets and make its journey towards the Science Center. 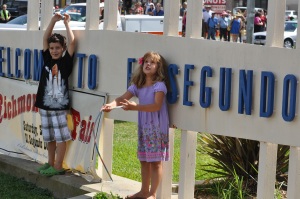 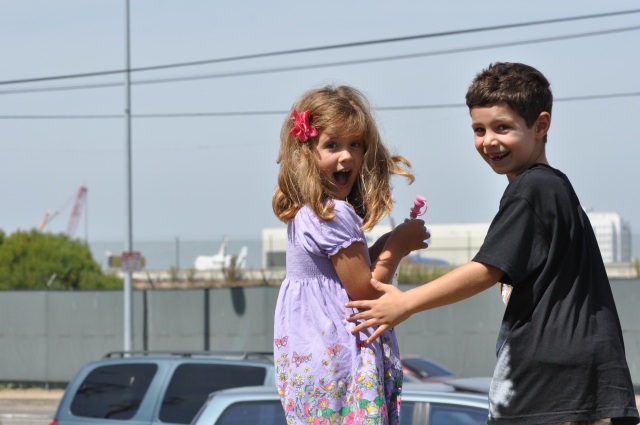