Last weekend Jacob asked if he could pleeeeease have a lemonade & kool-aid stand. Sure. Okay. So we encouraged him to do some planning, making a list of all the things he would need. Omie (my mom) was here and so she went with him to the grocery store to buy cups and colorful straws (which Jacob was convinced was an absolute must for a successful lemonade stand). 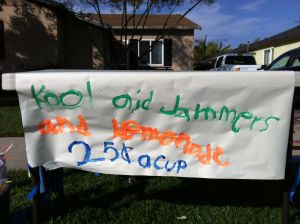 Today was the big day. When we came home from church he painted a sign, helped Steve set up the table, made the drinks, got the cash box ready and off he walked to take his seat. He had an entrepreneurial confidence about him- this was the way to strike it rich! So cute.

After being open for business for 3 hours there’s a lot to report:

• 4 neighbors came out, our friends the McGregor’s came out, a DaVinci teacher and a whole slue of amazing Young Life peeps came out. Thank you! Thank you! Thank you! Each and every one of you seriously rocked Jacob’s world today. And my mama heart is overflowing with gratitude that all of you made the effort to come our way just to help him realize his dream of a lemonade stand being a success. You all seriously rock! And you are the reason it was a huge success!!! Thank you!

• clearly advertising works! Without advertising Jacob would have sold 13 cups (due to our neighbor’s interest in seeing his stand). Steve and I posted on FB last night and a grip of YL friends made a concerted effort to come stop by, rocketing his sales to 63 cups!!!! Wowsas!!

• Jacob is now off to an amazing start with his quarter collection! Last night while Steve and I attended a friend’s wedding, Jacob and Natalie were able to spend the night at their grandparents place. What a treat it was for Jacob when Grandpa showed him his own coin collections. And what an extra special gift it was for Grandpa to present to Jacob his very own blue book so that he could start his own quarter collection! For a boy like Jacob who is fascinated with currency and also loves organization, this is the best of all worlds that make him happy! 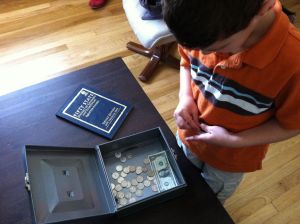 With all the quarters that were rolling in with today’s lemonade/kool-aid business, he’s already found:

• green was the preferred color of straw choice by customers. Jacob would exclaim with surprise “Wow! Another person wants a green straw! Green is definitely the favorite!” There were a few who wanted orange, a few pink and only two chose yellow.

• he learned what a “tip” is. Our neighbor Javier drove up in his car hoping it could be drive-thru lemonade stand. Too funny! He asked for one cup of lemonade but gave Jacob two dollars. Jacob was confused why Javier had given waaaaay too much money. Javier told him, “It’s your tip.” Jacob looked up at me with the most confused look and whispered, “Mama, what’s a tip?” When he realized that Javier was paying him $1.75 extra just for the nice service- whoa!!! that put a h-u-g-e smile on Jacob’s face and a whole new understanding of how deeply satisfying a great big tip can be for someone in the service world!

• he learned about good customer service: greeting people, being polite, making eye contact, not touching the rim of the cup or the end of the straw where people will place their mouth, realizing that each person may like a different quantity of ice in their drink and asking about that, pouring the same quantity of drink in each cup to keep a standard, and saying ‘thank you for coming’.

• he learned that money can be made selling lemonade!!! Tonight he said to me, “Mama, wow! Last week I bought Natalie a penguin for $40. And today I already made $11 and a whole bunch of quarters for my collection. Wow. Mama selling lemonade REEEEEEALLLY works!” And that’s why, I’m afraid, he’s already dreaming up having a lemonade stand every weekend. Ha!

Thank you so much to all of you who helped make this day such a success for Jacob. Thank you. Thank you. 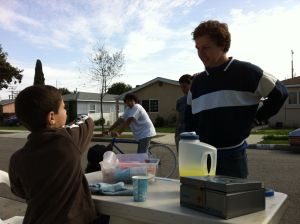 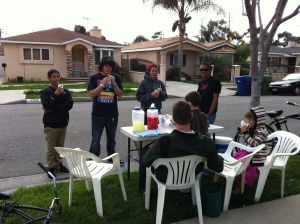 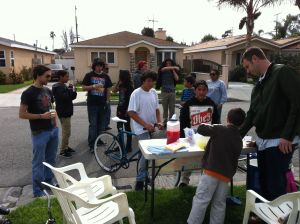 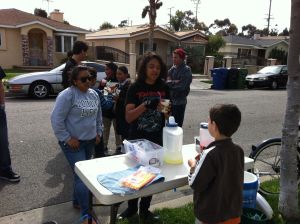 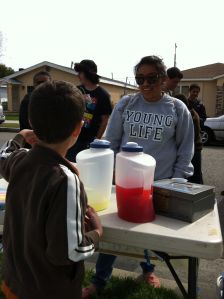 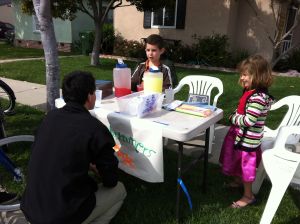 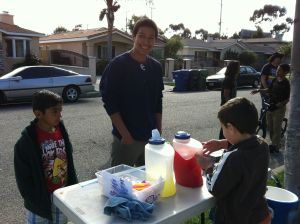 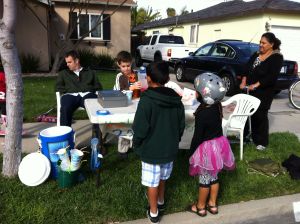