Today marked an important day in the Wallis family. It was Jacob’s very first time playing at a baseball game. Considering how much baseball was a h-u-g-e-l-y significant part of Steve’s life, I know that today was a very special day. What a sweet afternoon it was sitting amongst lots of parents on the bleachers, watching our children give it their best. And also to see how sweetly innocent they all are in terms of what they still don’t know. I couldn’t help but have a huge grin on my face for the full hour. It was just sweet fun. Kids playing with the red dirt instead of focusing on the game. Kids running to first base with their bat in hand. Kids not knowing where in the world the bases were located and running haphazardly in the grass. One kid, instead of throwing the ball to home, decided to run all the bases to home with the ball in hand. A kid on first passing a kid who was on second, and then together the two kids running to third. But then when the coach told the one who was initially on first to head back to second, both kids getting confused and both of them running back from third base back to second. Yeah. One of those kids was my son. Pure awesomeness. I just loved the innocence of it all. At one point Jacob was so in awe of the base that he stood there hunched over trying to pick it up and look under it- all the while the game was continuing. Oh my goodness I was loooooving it. 🙂 They were all trying so hard with what they knew. It was such a delight. Here’s potentially to years that lie ahead of us, sitting in bleachers, watching Jacob don his baseball hat. Cheers to the future of a sport that I know holds a very special significance to Steve. 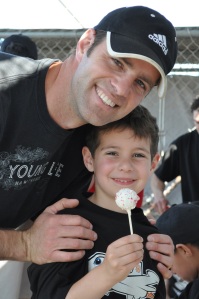